Billabong’s Losses Widen In First Half

All figures quoted are in Australian dollars unless otherwise stated. As well, the company provided an update on the scheme implementation deed with Boardriders, Inc., under which it is proposed that Boardriders will acquire all of the shares in Billabong, other than those already owned by its related entities.

Overview:
• First half (H1) Earnings Before Interest Taxation Depreciation and Amortisation, excluding significant items and discontinued businesses (EBITDA) of $19.3 million, down 19.1 percent year-on-year (yoy) as reported and down 15.9 percent (yoy) constant currency (cc)
• Americas continues positive performance with H1 EBITDA up 34.1 percent cc (yoy) before global allocations
• Europe H1 EBITDA down 29.4 percent cc (yoy) before global allocations due to a wholesale revenue timing shift and weaker than expected retail results
• Asia-Pacific H1 EBITDA down 9.2 percent cc (yoy) before global allocations as difficult market conditions continue
• Net Loss After Tax of $18.4 million
• Guidance affirmed for 2018 Full Year (FY) EBITDA of between $51.1 million and $54.0 million
• The Directors unanimously recommend that shareholders vote in favour of the Scheme and Independent Expert concludes the Scheme is fair and reasonable, and in the best interest of shareholders
• Continued lack of meaningful earnings growth, coupled with the maturing term loan, means the company must address debt levels and its capital structure
• If the Scheme proceeds, shareholders will receive certain value for their investment, and will avoid material ongoing risks and uncertainties

Billabong chief executive officer Neil Fiske said, “The results we are reporting today are consistent with the updated guidance given in January–namely that we would be down in the first half, but expect to be up in the second to deliver full year EBITDA of $51.1 million to $54.0 million–at or just above last year.

“The result is reflective of the ongoing difficult trading conditions in retail and much of the action sports sector. While our Americas region has again produced another good result, with EBITDA up 34.1 percent constant currency year-on-year, it is the smaller half year for that region. In contrast, trading proved challenging in Asia Pacific, where H1 is the larger half.

“Our global change initiatives are delivering benefits through higher gross margins across all regions, up year-on-year from 51 percent to 52 percent. However, systemic and structural changes in retail mean the conditions that affected the first half results are likely to prevail in the second half and beyond.

“While we reiterate our guidance–that EBITDA will be up in the second half to take us equal to or marginally ahead of FY17 overall–the composition will be different to that of H1, with the Americas more subdued after a period of strong recovery.

“This result and our expectations for the full year reflect the challenge we face in converting our operational improvements into EBITDA growth. The benefits from initiatives such as global sourcing, concept-to-customer and business simplification continue to be offset by negative financial impacts due to unfavorable external conditions.

“We have made substantial progress over the last four years, but we have had to confront tens of millions in adverse currency movements on our product costs, industry bankruptcies and account closures across multiple geographies and fundamental channel shifts away from brick and mortar. The fact that a number of industry participants are currently undergoing a sales process is yet another indication of the tremendous disruption that we are witnessing. These changes are systemic, structural and set to continue.”

EBITDA for the half was $19.3 million, compared with $23.9 million the prior corresponding period, down 19.1 percent as reported and 15.9 percent in constant currency. There were significant revenue and cost shifts between H1 and H2 that contributed to the reduced H1 EBITDA which should be recouped in the second half, specifically:
• A revenue shift in the wholesale shipping pattern in Europe between the halves, which accounts for about $1.5 million of the first half EBITDA decline; and
• A shift in the timing of some Billabong global marketing costs from H2 into H1, which represents another $1 million of the lower H1 EBITDA.

Total revenues for the half were $474.5 million, down 3.1 percent as reported and 1.5 percent in constant currency.

Gross margins were up 100 basis points to 52 percent and were up in every region, marking continued progress in global sourcing and concept-to-customer initiatives.

The company reported a Net Loss After Tax of $18.4 million. 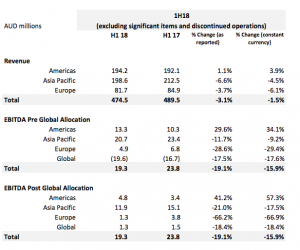 All figures are constant currency, and exclude significant items and discontinued
operations, unless otherwise stated.

The Americas produced another good result, delivering the benefits of change initiatives undertaken in the past four years. EBITDA, prior to global allocations, lifted 34.1 percent to $13.3 million, with total revenue up 3.9 percent. Cost of Doing Business (CODB) was lower by 40 basis points (bps), and margins expanded 110bps.

Ecommerce continues to make good inroads in the Americas, growing 19.5 percent, and is most developed in this region, representing 9.6 percent of sales. Brick and mortar comparable store sales were up 0.7 percent on slightly lower margins. Total comparable retail sales, combining comparable stores and ecommerce, were up 5.8 percent and margins were down by 60bps.

The company expects revenue and EBITDA gains in the Americas to level out in the second half as it cycles tougher comparables and operational improvements.

Asia-Pacific (APAC) has not yet turned the corner, although several of the improvement areas outlined at the Annual General Meeting in November have begun to show positive results.

EBITDA prior to global allocations for the region was down 9.2 percent in constant currency, a decline of $2.1 million.

Total revenues were down 4.5 percent–up 1.3 percent in retail but down 16.6 percent in wholesale. This reflects ongoing weak market conditions, but also the lag effect of some assortment and execution issues that the company has previously identified. Those issues have been addressed but the market outlook remains weak, limiting the rate of potential EBITDA recovery.

Gross margins improved 120bps. CODB was down 0.5 percent in absolute dollars, but as a percentage of revenue increased 180bps on lower sales.

APAC brick and mortar retail comps were up 0.9 percent for the half. However, retail conditions remained challenging in Australia, where first half comparable store sales ended down 0.6 percent, although comps during the key December month were up 2 percent in Australia on the back of the improvements outlined in the AGM update.

Total comparable retail sales for the APAC region were up 1.8 percent for the half. Retail margins were up 120bps.

Results in the half in Europe were affected by the timing shift in wholesale revenue, and weaker than anticipated retail results. There was a good improvement in margins, and the region is still expected to be ahead in EBITDA for the full year on a relatively flat revenue line.

EBITDA, prior to global allocations for the first half, was down 29.4 percent to $4.9 million, a $2 million decline on a constant currency basis.

Total revenues were down for the region by 6.1 percent in constant currency, while gross margins were up by 100bps. CODB was about flat to the prior year but was up 300bps as a percentage of the lower sales number.

Retail in Europe performed below expectations in the half, with brick and mortar comparables down 2.3 percent. Ecommerce grew 15.1 percent and now represents 5.5 percent of total sales.

The results varied among the company’s big three brands of Billabong, RVCA and Element. In wholesale equivalent sales (including sales to own retail):
• Billabong was down 0.5 percent for the half (up in Americas, down in APAC)
• Element was down 13 percent, impacted by the timing shift in Europe and a change in distribution strategy in Canada
• RVCA was up 9.6 percent with growth in every region

Billabong continued to gain share in the important US specialty channel, strengthening its position as the number one brand within the core market. Element faced a challenging first half in all geographies, but is expected to record modest full year sales growth in Europe, its largest market. RVCA continues to show good share results in its core market in both men’s and women’s categories.

Global social media followership for the Group’s brands, athletes and ambassadors now exceeds 41 million. The scale of this audience is a significant competitive advantage as the brands continue to develop their omni-channel presence with a highly engaged customer base.

No dividend has been declared.

The company confirms the guidance provided in early January that it expects the Group’s FY18 EBITDA (excluding significant items) to exceed the prior year, to be in a range between $51.1 million and $54 million, subject to reasonable trading conditions and currency markets remaining relatively stable.

The Group continues to have a significant bias of second half earnings to the Americas, with a high concentration of sales in the month of June. Trading in that month remains key to achieving the Group’s full year expectations.

On January 5 2018, the company entered into a scheme implementation deed with Boardriders, Inc. under which it is proposed that Boardriders will acquire all of the shares in Billabong, other than those already owned by its related entities. Boardriders is the parent of Quiksilver, Roxy and DC Shoes.

Billabong Chairman Ian Pollard said, “The first half result we report today and the challenge of the task ahead need to be seen in the context of the proposal from Boardriders, Inc. that is currently before shareholders. The offer of $1.00 per share represents certainty for shareholders.

“The Directors unanimously recommend the proposal, with founder Gordon Merchant and a nominee company of cornerstone investor Centerbridge Partners both stating they intend to vote in favour of the Scheme, in the absence of a superior proposal.

“The Independent Expert has concluded that the Scheme is fair and reasonable and, therefore, in the best interests of shareholders, in the absence of a superior proposal.

“Approval of the Scheme by shareholders will avoid serious ongoing risks and uncertainties associated with Billabong’s business – both operational risks and risks associated with the current capital structure, including refinancing risk.

“The proposal represents a 16.6x enterprise value/pro-forma FY17 EBIT multiple and is a 69 percent premium to the three-month average share price prior to the disclosure that Boardriders had approached Billabong with a proposal to acquire the company. In addition to acknowledging this favorable multiple and the premium associated with the Scheme, the Directors’ recommendation to vote in favor reflects the ongoing difficult conditions in our sector. It is worth noting that in the almost three months since the Boardriders proposal was first made public the company has not received any other competing proposal.

“While Billabong has made significant operational progress in recent years, this progress has been slower and more difficult than anticipated at the time of the 2014 recapitalisation, and its earnings growth has been impacted by market conditions and other factors including currency, channel shifts and significant restructuring in the global retail sector.

“The full year guidance we reiterate today implies the third consecutive year of relatively flat EBITDA (adjusting for the sale of Tigerlily), where market conditions have offset the operational progress achieved within the business. These difficult market conditions are not expected to improve in the near term.

“At the company’s AGM in November, I updated shareholders that the board was well advanced in assessing various options related to the company’s approximately AU $2281 million term loan which matures in September 2019, with the focus on maximising shareholder value.

“Despite asset sales, improving cash conversion and lowering cash restructuring costs over recent years, debt levels and the maturity of the term loan must be addressed.

“The Board has considered alternative scenarios in detail, including raising more equity and refinancing, or selling more assets. Both of these options offer less certainty, particularly in an environment where debt funding for retail-oriented companies is proving to be very difficult.

“Having regard to all the factors, the Board believes that the Boardriders offer provides both a superior outcome for shareholders–and a far more certain one.

“If this Scheme does not proceed, change will be necessary to the company’s capital structure, strategy and operations.”