The Finish Line Inc. pre-announced fourth quarter results that showed earnings coming in ahead of guidance while same-store sales arrived below guidance.

The pre-announcement comes as Finish Line announced that it had reached a deal to merge with JD Sports.

The company now expects to report fourth quarter earnings per share from continuing operations between 39 cents and 40 cents on a GAAP basis. Excluding adjustments, adjusted earnings per share from continuing operations are expected to be between 58 cents and 59 cents compared to the previous adjusted guidance range of 50 cents to 58 cents. Despite the flat sales, disciplined expense and inventory management helped offset top-line pressure.

For the 53-week fiscal 2018, consolidated net sales were $1.84 billion, down 0.3 percent compared with the 52-week fiscal 2017 driven by a 1.9 percent decrease in Finish Line sales, partially offset by a 7.5 percent increase in Finish Line Macy’s sales. Full-year comparable sales for Finish Line decreased 3.9 percent. The company now expects full-year earnings per share from continuing operations to be between 35 cents and 36 cents on a GAAP basis. Excluding adjustments detailed in the following table, adjusted earnings per share from continuing operations are expected to be between 68 cents and 69 cents, compared to the previous adjusted guidance of 59 cents to 67 cents.

“Fourth quarter comparable sales were more challenging than we expected,” said Sam Sato, chief executive officer of Finish Line. “I’m pleased with how our team responded to the top-line headwinds by controlling inventories and expenses, which we expect will deliver profitability at or above the high-end of our guidance range.”

Finish Line now plans to report actual fourth quarter and fiscal year 2018 results on March 29, 2018 versus April 3, 2018 as previously announced. Based on the announcement that Finish Line has agreed to merge with JD Sports, the company will not host a conference call and webcast in conjunction with its fourth quarter and fiscal year 2018 earnings report. 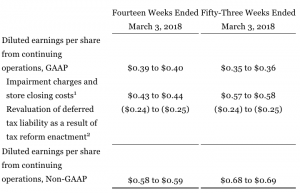 Estimated charges primarily represent write-off of long-lived assets of underperforming stores and technology assets no longer used by the company.

Amount represents the company’s current estimate for the re-measurement of the company’s deferred tax liabilities due to the United States tax reform legislation enacted December 22, 2017.