Nike said the quarter’s performance was marked by double-digit revenue growth driven by strategic execution of the Consumer Direct Offense across all dimensions of the portfolio globally.

“Nike’s ambitious digital transformation is driving strong results and momentum in North America and in our international geographies,” said Mark Parker, chairman, president and CEO, Nike, Inc. “We’re incredibly energized about 2019 – with a full innovation pipeline; the most personal, responsive retail experiences in the industry; and a supply chain that’s delivering speed at scale.”*

Diluted earnings per share for the quarter were 52 cents a share, an increase of 13 percent driven by double-digit revenue growth, gross margin expansion and a lower average share count, partially offset by higher selling and administrative expenses and a higher effective tax rate.

“Amidst an increasingly dynamic macro environment, what is certain is that Nike’s execution of the Consumer Direct Offense is driving consistently strong growth across our diverse, global portfolio,” said Andy Campion, executive vice president and chief financial officer, Nike Inc. “As we continue to invest in digital transformation, we are driving consumer-centric disruption in our industry and unlocking new opportunities for growth.”*

Among regions for Nike Brand, sales in North America rose 5.6 percent on a reported basis to $4.1 billion from $3.9 billion and grew 6 percent on a currency-neutral basis.

The quarter marked the second straight healthy quarter for the North America region.  Revenues had also risen 6 percent in the first quarter after sliding for four straight quarters. Sales on a currency-neutral basis were down 2 percent in Q418, 4 percent in both Q318 and Q218 and 3 percent in Q118.

Operating earnings in the region in the latest quarter rose 7.5 percent to $1.08 billion from $1.0 billion.

In the Europe, Middle East & Africa (EMEA) region, sales for Nike Brand were up 11.2 percent to $2.61 billion and gained 9 percent on a currency-neutral basis. Operating income reached $501 million against $451 million, a gain of 11.0 percent.

Greater China’s revenues for Nike Brand jumped 24.4 percent to $1.38 billion from $1.11 billion and grew 20 percent on a currency-neutral basis. Operating income rose 10.9 percent to $501 million from $451 million in the same period a year ago.

In the Asia Pacific & Latin America (APLA) region, sales for Nike Brand advanced 6.8 percent to $1.27 billion from $1.19 billion and gained 14 percent on a currency-neutral basis. Operating profits rose 24.2 percent to $323 million from $260 million.

Converse’s revenues gained 9.1 percent and moved up 7 percent on a currency-neutral basis. Operating earnings improved to $98 million from $89 million, a gain of 10.1 percent.

Inventories for Nike, Inc. were $5.4 billion, up 1 percent compared to the prior year period, primarily driven by strong demand for key franchises and effective inventory management, resulting in healthy inventories across all geographies.
Cash and equivalents and short-term investments were $4.0 billion, $2.3 billion lower than last year as share repurchases, dividends, repayment of notes and investments in infrastructure more than offset net income.
Share Repurchases

During the second quarter, Nike, Inc. repurchased a total of 16.1 million shares for approximately $1.3 billion as part of the four-year, $12 billion program approved by the Board of Directors in November 2015. As of November 30, 2018, a total of 183.3 million shares had been repurchased under this program for approximately $11.3 billion. In June 2018, the Board of Directors authorized a new four-year $15 billion share repurchase program that will commence upon the completion of the current program. 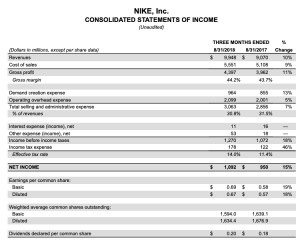