“In 2018, our mindset was to seek new growth opportunities by comprehensively evaluating our domestic and international businesses while drilling down to specific regions and channels of distribution,” began Robert Greenberg, chief executive officer of Skechers. “These opportunities were across our product lines with proven styles, new designs and collaborations, and in select regions where we saw great potential. Product highlights included the resurgence of our heritage Skechers D’Lites collection, which continues to gain momentum around the world, our iconic Skechers GOwalk line, and our comfortable and easy-to-wear men’s slip-ons, among others. With the strength of our products, we remain the number one lifestyle casual, dress casual, walking and work brand in the United States. We also focused on growing our online business around the world—improving the functionality of our ecommerce sites in the United States and China, and launching an ecommerce platform in India, while also increasing our global retail footprint, ending 2018 with 2,998 Skechers company-owned and third party-owned stores. Additionally, we began delivering Spring 2019 product with the relevant marketing support, and we also started our Fall/Winter 2019 meetings with key accounts. We are looking forward to what we believe will be a new first quarter sales record.”

Weinberg continued: “Our international business represents our most significant growth opportunity. To maximize on that opportunity in two key areas, we recently completed the transition of our India joint venture to a wholly owned subsidiary and reached an agreement in principle to establish a joint venture in Mexico with our current distribution partner. We expect these strategic investments to be accretive to our diluted earnings per share in 2019. Additionally, we continue to invest in infrastructure—we broke ground on our new distribution center in China in the fourth quarter as well as on the expansion of our global headquarters in Manhattan Beach in January. We remain focused on efficiently and profitably growing our business for the future.” 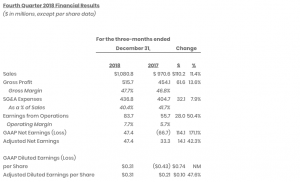 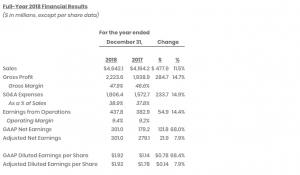 Net earnings were $301.0 million and diluted earnings per share were $1.92. For the full year, the company’s income tax rate was 14.0 percent.

“In the fourth quarter, our strategy continued to yield strong results,” began John Vandemore, chief financial officer of Skechers. “Despite significant foreign currency headwinds, we grew our international businesses, and domestically, the strength of our product continued to deliver growth. We also executed against our capital allocation plan. In 2018, we returned $100.0 million to shareholders in the form of share repurchases, while also investing in the necessary infrastructure to support our growing business.”

For the first quarter of 2019, the company believes it will achieve sales in the range of $1.275 billion to $1.300 billion, and diluted earnings per share of $0.70 to $0.75. These amounts include the impact of existing foreign exchange rates and a shift in some sales between the first quarter and second quarter due to the timing of Easter in late April 2019. Skechers expects that its annual effective tax rate in 2019 will be in the range of 14 percent to 18 percent.