Starting in late February in all Target stores and online at Target.com, the exclusive kids’ assortment will feature more than 90 pieces of Umbro soccer apparel, footwear and equipment. With nearly 100 years of history in the sport, Umbro has long been the official soccer uniform for some of the top teams around the world, Target said in a release.

“We’re always looking to connect with our guests in new and unique ways, and for families and kids, the introduction of Umbro will mean even more reasons to choose Target,” says Mark Tritton, executive vice president and chief merchandising officer at Target. “Soccer is one of the fastest-growing sports in the U.S. and continues to grow in popularity among our guests. As the only mass retailer to sell Umbro, we’re giving more families access to the sport through stylish and affordable apparel and gear.” 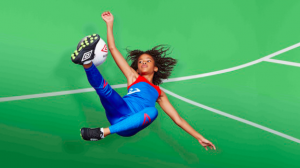 The products range from shorts and t-shirts, to jerseys, cleats and shin guards.