Posted at 10:47h in Latest News by Andy Polk
Share

After three tours of duty in Afghanistan, former US special operations soldier Matthew Griffin now wants to help the country by opening a factory there instead of going on combat missions.

Mr Griffin, who was an Army Rangers captain, is the founder and chief executive of footwear business Combat Flip-Flops, based in Washington state.

The 34-year-old came up with the idea for the company after visiting a shoe manufacturing facility in the Afghan capital, Kabul, that made military boots.

“It came as a brainwave,” he says. “I realised that flip-flops were as popular in Afghanistan as they are in the US, that the two countries had that in common.

“So I thought to myself, ‘Why not start a business making flip-flops in Kabul which we can then sell in the US and around the world?’

“That was back in 2009. It is fair to say that the business has faced a few hurdles since then.”

The main hurdles have been three failed attempts in the intervening years to contract out the manufacturing of the flip-flops to existing shoe factories in Kabul.

To sidestep the problem, Mr Griffin now wants to open his own factory in the country – by driving one in.

To make this possible, Mr Griffin and his colleagues have developed a flip-flop assembly line that fits inside a standard cargo container. But they still need to secure sufficient funding to return production to Afghanistan.

Mr Griffin says he always wanted to join the US Army. Enrolling when he was 18, he went on to spend three years with the Army Rangers between 2003 and 2006. The Rangers describe themselves as the US Army’s “premier direct-action raid force”. 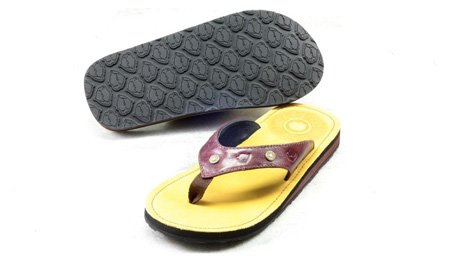 The company describes its flip-flops as “bad for running, worse for fighting”

Mr Griffin left the army in April 2006. He says: “By then I had two children, and I was barely home. I wanted to spend time with the family.”

Yet civilian work would three years later send him back to Afghanistan. By then he was working for Remote Medical International (RMI), a US company that offers medical assistance and rescue services to people working in remote or hostile environments around the world.

It was while at RMI that Mr Griffin visited the shoe factory in Kabul in 2009.

“I couldn’t believe how much Kabul had changed for the better over the intervening years,” he says. “It felt infinitely safer, and there were small businesses growing everywhere.

“So I instantly thought, ‘Why don’t we help this, why don’t we send more entrepreneurs not soldiers?’

“And then I visited the shoe factory, and I wasn’t prepared for what I saw – it was a clean, sterile, modern manufacturing facility. It was making military boots, but it could easily also make flip-flops. That’s where the crazy idea came from.”

With busy work and family commitments, Mr Griffin says his idea “stagnated for a year and a half”, until he eventually launched the business in early 2011. One of his former Army Rangers friends, Donald Lees, came on board, as did Mr Griffin’s brother-in-law, Andrew Sewrey. 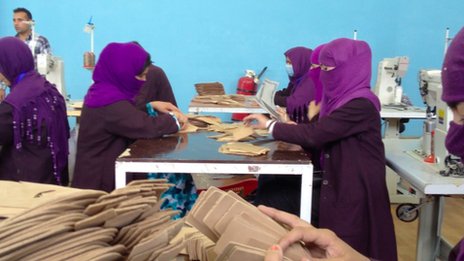 The company has struggled to contract out its manufacturing in Afghanistan

With none of them having any experience of making shoes, Mr Griffin says they did the only sensible thing: “We Googled ‘how to make flip-flops’.”

They used their savings and raising additional funds through garage sales to get the company off the ground. The name is a play on both Mr Griffin and Mr Lees’s military background.

Before production could start in Kabul, Mr Griffin and his two colleagues designed some flip-flops and got 100 prototypes made in China.

The prototypes were good enough to secure a number of advance orders.

And so Combat Flip-Flops signed a deal with the shoe-making factory in Kabul for 2,000 pairs.

But when he arrived in Kabul in the summer of 2012 to pick up the flip-flops, Mr Griffin immediately realised that they hadn’t been made well enough.

“It was a memorable moment, that’s for sure,” he says. “We must have smoked a packet of cigarettes in 20 minutes.

“We ended up giving the 2,000 pairs of flip-flops away to people in Kabul.” 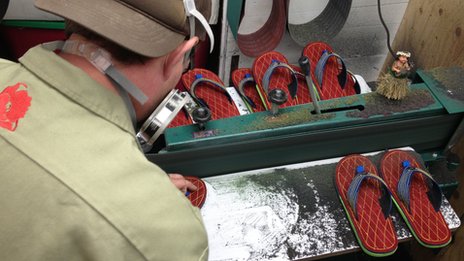 The company has developed a manufacturing facility in a cargo container

Undeterred, Mr Griffin went to another shoe factory in Kabul, but it turned him away because it said his order wasn’t large enough.

So instead, he signed a deal later in 2012 with a third facility in the Afghan capital.

“All appeared to be going well at last, but then communication from the factory dropped off,” says Mr Griffin. “We then heard that the factory has lost its order for [military] boots, and would have to close. So we were back to nothing again.”

With already long overdue orders to fulfil, Mr Griffin says that with a heavy heart he the decided at the start of this year to switch production of the flip-flops to the US, and more specifically to his garage in Issaquah, near Seattle.

“It dawned on us that you only need basic machinery to make flip-flops, so we started to make them in my garage. The idea for the cargo container came from there,” he says. 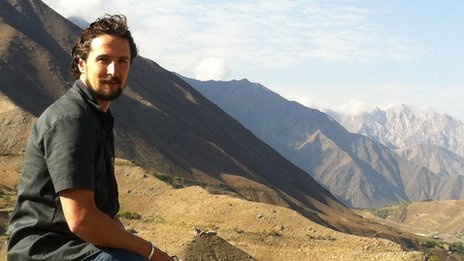 Struggling to keep up with demand this year, some production has since been outsourced to Colombia in South America, but Mr Griffin hopes to resume flip-flop manufacturing in Afghanistan next year as soon as he can raise the funds.

In the meantime, Combat Flip-Flops continues to also sell both sarongs and scarves that are made by Afghan women.

If taking the mobile flip-flop factory to Afghanistan is successful, he hopes the concept can “be extended to other former combat zones, to help provide employment and boost their economies”.

Mr Griffin adds: “The business has faced some challenges along the way, that’s for sure, but being in the Army Rangers was good training – you have to think your way out of a problem in high-stress conditions and a very short timeframe.”