Goldman Sachs boosted its rating on shares of Nike Inc. to “buy” because a “deep dive” analysis shows that the brand is poised for continued sizeable growth in China and should benefit from its resilient popularity among young consumers in North America.

Other reasons for the upgrade include expected strong margin improvement stemming from efforts to better control distribution and the scaling of its e-commerce and app platform as well as the healthy overall backdrop for the athletics space.

“We believe Nike is on the cusp of a sharp acceleration in EPS growth,” wrote Goldman’s analyst team led by Alexandra Walvis in the 41-page note. “We increased our estimates and price target following a deep dive; expect a forward 3-year EPS CAGR of 19 percent versus 5 percent in the prior 3-year period. GS 2022E EPS at $4.22 is 5 percent ahead of consensus.”

Walvis writes that Nike’s “disruptive and innovative strategy” is positioning the company for multi-year growth, expansion in margins and higher returns on invested capital.

The report cited five factors driving sales and margins in the years ahead:

In China, Walvis noted that Nike and Jordan together commanded over 20 percent of the Chinese activewear market in 2018 with Adidas around 20 percent as well. Resurgent growth is coming from Li Ning and Anta but the two brands still only account for 17 percent share. That leaves over 20 percent of the Chinese athletic market still accounted for by other local brands and, further, 20 percent is represented by smaller international players. Walvis wrote in the note, “Put simply, the share gain opportunity from small local brands exceeds the threat from Anta and Li Ning in our view.” 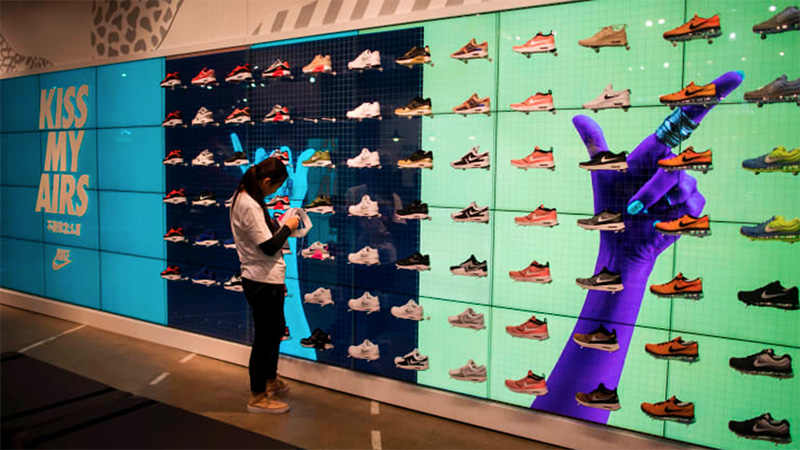 Goldman expects Nike could grow revenues in China at a high-teens pace, with direct-to-consumer (DTC) projected to represent 50 percent of the region by 2023. By channel, the fastest growth is expected to come from e-commerce led by TMall and Nike.com, but Nike’s consolidated wholesale base, led by TopSports and Pou Sheng, is expected to support continued wholesale channel growth as well.

In North America, new survey data from WGSN shows Nike is “top-of-mind” among more consumers than any other athletic brand, far outstripping peers. Nike’s brand affinity among the 16-to-24 age group is especially strong, positioning the brand well for growth as this age group grows in spending power.

By category, apparel and women’s are seen as two untapped opportunities for growth. Despite Nike’s position as the top athletic brand in the U.S. and globally, the brand under indexes relative to peers in apparel and women’s product which accounted for 31 percent of Nike brand sales and 23 percent of the company’s demographic mix, respectively, in its latest year. In contrast, apparel makes up 38 percent of Adidas’ mix. Wrote Walvis, “We believe NKE is set to refocus on apparel following 2019 apparel supply chain challenges, and have seen notable growth in product offerings in women’s and apparel on the Nike.com website.”

Goldman also sees opportunities in premium and higher-priced products led by the broadening of the Jordan brand into a lifestyle brand.

Regarding its efforts to control distribution, Goldman believes progress has been made and is accelerating. Key elements are channel shift towards DTC, improving speed-to-market and a focus on inventory management that Goldman sees driving improved pricing and reduced discounting activity.

At the same time, Goldman sees “strong signs” that steps to reduce exposure to low-quality wholesale partners and deepening partnerships with select strategic partners are helping improve the quality of sales and gross margins. Walvis wrote, “As Nike integrates further with strategic partners, we also see scope for accelerating growth through a better understanding of, and more regular touchpoints with, consumers.” 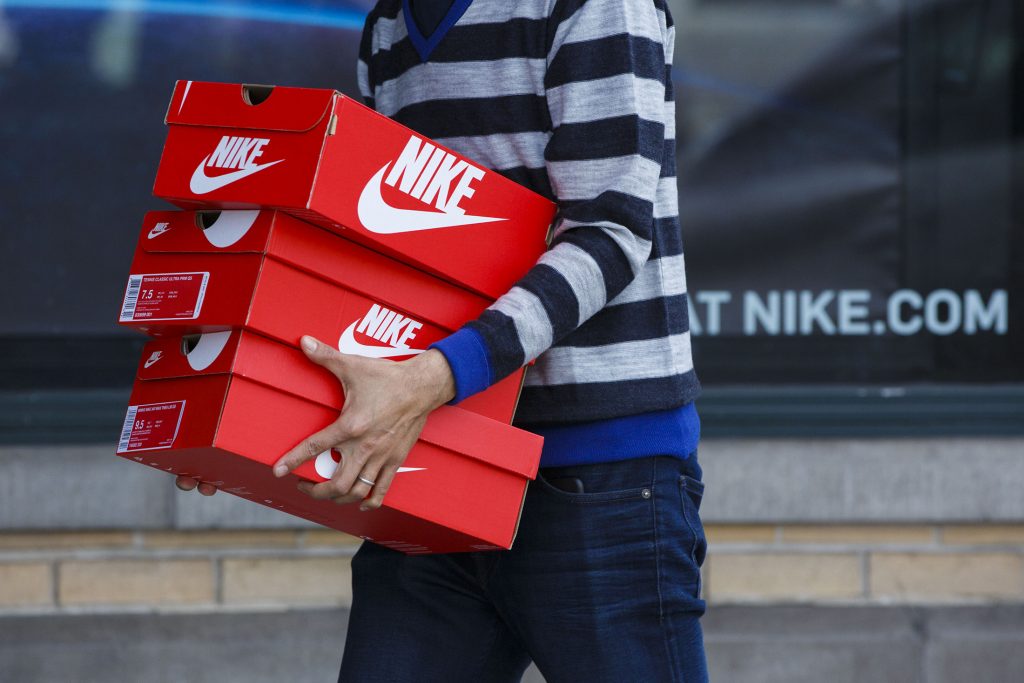 On digital optimization, Walvis wrote that Nike is uniquely positioned versus other brands with a scaled e-commerce business that Goldman believes can beat margins and returns accretive.

Walvis noted that while Nike’s app ecosystem had historically been dominated by fitness, running and other activity-based apps that support engagement and deliver data to the company, newer commerce apps, notably the Nike app and SNKRS, have represented a growing proportion of downloads and are becoming key drivers of revenue.

Walvis wrote, “This puts Nike in a unique position, relative to other companies in the athletic space. which either do well at commerce (selling gear/shoes) or fitness (tracking fitness / encouraging sports). The Nike app ecosystem now has a broader reach, and this continues to improve sequentially.”

On the overall athletic space, Goldman noted that global athletic category growth has “materially outstripped” growth in core apparel and footwear categories in recent years. Drivers have included a shift towards active footwear and apparel in developed markets, partly driven by fashion shifts toward sportswear styles. Walvis wrote that “sportswear” and “streetwear” trends have been resonating with high-end luxury brands continuing to elevate the aesthetic in their ranges.

A second primary driver has been the casualization of a wide variety of dressing occasions. In the workplace, casualization is expected to expand as businesses seek to recruit and retain a younger workforce. In developing markets, notably China, the athletic category is benefiting from increasing per capita incomes and increased sports participation from still a low base.

In a note, Wedbush analysts wrote that it expects Nike to slightly raise its FY20 outlook (excluding the divestment impact of Hurley) when it reports earnings on Q220 earnings on December 19. Continued robust growth in China, the late Q120’s launch of the Nike App in EMEA, and a prolonged back-to-school season in North America, along with slight upside to gross margin, is expected to support EPS of 59 cents a share in the period versus Wall Street’s target of 58 cents.

Wedbush wrote, “Our estimates for FY20/21 are being raised mostly on sales & gross margin upside from China, EMEA, & digital and a modestly improved FX dynamic. Importantly, there remain numerous areas of upside opportunity in FY20 & beyond, including: the Nike App in China, Nike Fit, RFID and other productivity strategies, clean/seasonable inventory, a robust product pipeline, and more. In the end, Nike’s merchandise, marketing, & distribution strategies resonate with consumers globally as the company also drives industry innovation & adeptly creates or captures incremental opportunities for the future.”