Nordstrom Inc., as expected, took it on the chin with fiscal second-quarter top-line results, but company management saw a silver lining to the dark clouds of the COVID-19 experience. Nordys saw the hit from the virus as an opportunity to accelerate strategic plans and to make long-term adjustments to its cost structure, investments and inventory mix.

“Our streamlined operations and inventory position gave us the flexibility to bring in new and relevant products,” explained company CEO Erik Nordstrom. “While inventories were constrained, and we left some demand unmet, our decision to be prudent with our inventory plans helped deliver better-than-expected merchandise margin, earnings and operating cash flow. We exited the quarter in an advantageous position with inventories clean and with open to buy to capture customer demand.”

Sales for the second quarter ended August 1 were said to be “in-line with the company’s expectations,” falling 53 percent, a decline to $1.78 billion. Sales declined 40 percent in the first quarter through April. This reflected temporary store closures for approximately 50 percent of the days during the quarter due to COVID-19 in addition to an approximately 10 percentage point timing impact from the Nordstrom Anniversary Sale shifting from the second quarter to the third quarter.

Top-performing merchandise categories were said to include home, kids wear, accessories, beauty, and active in both the Full-Price and Off-Price side of the business.

In e-commerce, total company digital sales decreased 5 percent, but that business took a big hit from the shift of Anniversary Sale out of the quarter. Excluding the Anniversary Sale shift impact, digital sales increased approximately 20 percent in the second quarter and rose in the mid-teens on a year-to-date basis. Traffic grew by double-digits year-over-year and sequentially improved from Q1, indicating signs of increasing customer demand. The company’s e-commerce business continued to experience significant growth in new Nordstrom digital customers with more than 50 percent growth in the quarter. However, conversion and demand trends were reportedly suppressed as a result of the constraints on inventory flow.

Management said that customers can now preview items through a digital catalog and build a wish list to enable them to check out faster when it was time to shop. Nordstrom.com customers created nearly 20 million wish lists, which the company said also allowed merchants to adjust in real time to high demand items.

Nordstrom elaborated, “We also increased customer engagement of contactless services such as curbside pickup and returns, which represent one-fourth of order pickup volume. In total, order pickup is approaching 15 percent of nordstrom.com sales.”

Initial store reopening trends reportedly improved from May into June and were slightly above expectations but saw some pull-back in July. “From a store traffic perspective, while we saw deceleration in July with the surge in COVID-19 cases in several of our larger markets, overall traffic trends have stabilized and improved,” Bramman explained.

Gross margin was 21 percent of net sales in Q2, decreasing from 35 percent in fiscal Q2 2019. The narrower margins were said to be due to “planned markdowns and deleverage from lower sales volume and reflected a sequential improvement in merchandise margin trends.”

Bramman also said they had fewer merchandise returns than expected, which benefited sales and merchandise margins. 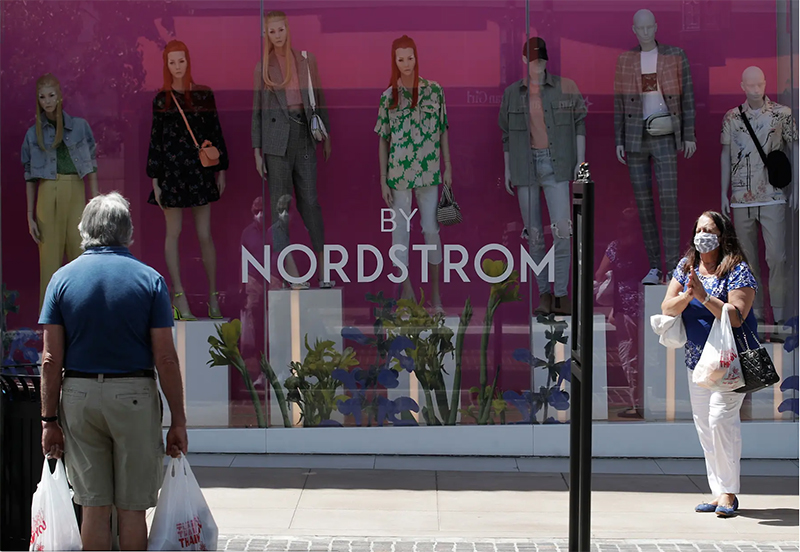 Nordstrom reported a loss of $255 million, or $1.62 per diluted share, for the second quarter. This included charges of 8 cents per share associated with the impact of COVID-19.  Results topped Wall Street’s consensus target calling for a loss of $1.46 a share.

“We benefited from the continued progress we are making on permanently reducing our cost structure,” said Bramman. “In addition to planned expense savings of $200 million to $250 million at the beginning of the year, we’re continuing to execute cash savings across expense, CapEx and working capital of more than $500 million net of COVID-19-related expenses. Tracking ahead of our plans, we realized $420 million in cash savings year-to-date.” She went on to say the company was also able to pay down $300 million on a revolving line of credit.

Nordstrom noted that the company ended the quarter with $1.3 billion in liquidity, with $1.0 billion in cash, and generated more than $185 million in operating cash flow, realigned inventory levels and reduced overhead expenses by nearly 20 percent.

Inventory decreased 24 percent at quarter-end, compared to the comp point last year. Excluding the Anniversary Sale event shift impact, the decrease in inventory was in-line with the decrease in sales. Nordstrom said that after reducing inventory by more than 25 percent in the first quarter they were able to mitigate markdowns and bring in newness for customers.”

“We increased receipts in July as we geared up for our Anniversary Sale that began on August 4,” Nordstrom said on a conference call with analysts. “This is our largest event offering new arrivals at limited-time savings. We’re in the final week of the event, and results are in line with our expectations, reflecting a notable sequential improvement in Full-Price sales trends. In Off-Price, traffic remains consistent, and we’re starting to see steady improvement in conversion and sales as we begin to flow in inventory receipts.”

Nordstrom went on to say that as the pace of change in customer behavior continues to accelerate, they also took proactive steps to execute their strategic plans with greater speed. “This included restructuring our organization and permanently closing 16 full-line stores, which contributed to overhead cost reductions of nearly 20 percent in the second quarter,” he said. It appears that many of the cost reductions will be permanent.

Areas that will continue to receive investment include Nordstrom Rack, marketing and the e-commerce business.

“We made foundational investments in our market strategy, our Nordstrom Rack brand offering and digital capabilities to scale our business,” explained Nordstrom. “As we look ahead, our team is unified in executing our market strategy to deepen customer engagement with a focus on offering a seamless and personal experience however they choose to shop with us.”

From a product standpoint, it was clear that the high-end retailer was struggling with the clear reality that the consumer for some time has been shifting their purchasing habits to a more casual mix of goods. The step back that Nordstrom had to take in Q2 enabled them to reset their mix going forward to reflect this ”casualization” of consumer taste. Active is also performing well. The other area that is getting more attention is Home.

“We took actions to meet evolving customer preferences by expanding our assortment to reflect a growing preference for categories focused on casualization, comfort, wellness and home,” explained Nordstrom.

Based on current trends and current inventory plans, Nordstrom is expecting “sequential and gradual improvement in sales, earnings and cash flow in the back half of the year.” They said the expectations reflect the Anniversary shift, stores remaining open, a continuation of increased inventory receipts in Full-Price and a steady flow of inventory receipts in Off-Price that began this month.