Posted at 13:06h in Latest News by Andy Polk
Share
Utilitarian in shape but with a metallic sheen, the footwear at Common’s LC:M presentation.As a shoe obsessive, I often point my camera lens at the catwalk floor, even when footwear isn’t the intended focus. At the recent London shows, two strong footwear themes emerged, and they have continued on into the Milan and Paris collections. 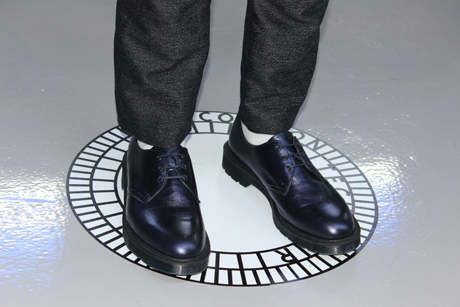 First there was a definite element of fashion following the austerity agenda with simple, utilitarian shoes, apparently reflecting the uniforms of working men (quite literally on the wet pavements at Topman Design). And second, we saw the continuing influence of trainers and sportswear details in high-fashion footwear.

A selection of lace-ups at Jonathan Saunders’ LC:M presentation, featuring Pop Art-bright solesHowever, this being fashion, looks can be deceiving, so apparently straightforward shapes such as simple workaday oxfords turned out to have a subtle, metallic sheen (as at Common) or were high-gloss with elements of bright colour at the sole (at Jonathan Saunders).

The shoes at Prada menswear show in Milan were a trainer-shoe hybrid in solid, glossy colourAt Prada, always directional with their footwear, shoes were a shiny hybrid of chunky trainer and shoe in solid brights, not wildly dissimilar to the Miu Miu men’s trainer-shoe amalgams of the 90s with their then-revolutionary rubberised flashes of primary colour. The proportions of these shoes were less extreme than the espadrille platforms and raised shark-teeth soles of recent Prada collections and, as such, are likely to find a wider fan-base. 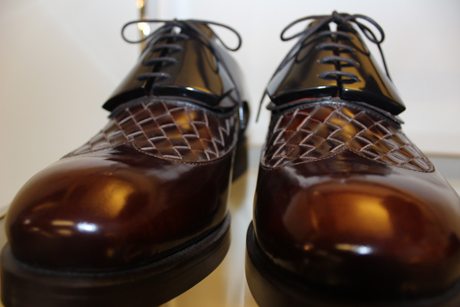 Bucking the utilitarian, minimal trend, these shoes by Diego Vanassibara feature wooden lacquer-ware detailsWhich brings me on to a third men’s shoe theme of note: a certain element of proportion play, verging on the ugly, but in pared-back colours and with one or two elements exaggerated as part of a minimal whole.

Rick Owens has been playing with this outline for some time, with his solid rubber-soled trainers and canvas boots with a slightly turned-up profile, like an exaggerated form of the classic downtown baseball boot (one such style of his is titled Ramones). In his Paris menswear show this week, the heavy rubber toes of the boots were seen peeking out from under long trouser hems in his airman-meets-Trojan-warrior collection.

Owens’ ongoing collaborations with Adidas also explore this exaggerated perspective as with the avant-garde elevated soles on display at his much-discussed step-dancing women’s show.

Glossy neo-spats at Carven’s AW14 pool-hall/gambling den held menswear show in ParisLess controversially, perhaps, at Carven, earlier in the week as part of a collection infused with looks inspired by the sartorial excess of classic American gangster style, spats were given a futuristic update: alongside solid white, black and grey shoes exhibiting elements of both the high-gloss and minimal trends. 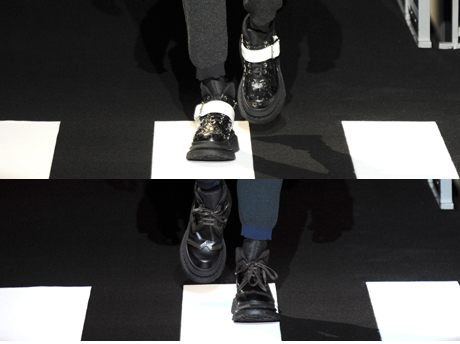