The all-American sports firm has revealed the futuristic new podium looks for Team USA’s athletes at the upcoming Winter Olympic Games in Sochi.

America’s Olympic and Paralympic athletes have lucked out with their warm-weather sporting gear for the Sochi 2014 games as sportswear giant Nike has created a futuristic and metallic look for the competitors.

On the podium, lucky medalwinners will wear a mix of Aeroloft jackets filled with warm goose-down (and featuring micro laser perforations for breathability) with tech pants for men and sculpt tights for women.

For footwear the athletes will slip into Nike high tops in a chukka boot style that features a one-piece ‘Flyknit’ knitted construction in wool, for a combination of warmth and lightness. Patriotic details abound, from the slogans embroidered inside the pockets and printed onto insoles to the ‘Stars and Stripes’ patterns which appears on the athletes’ glove 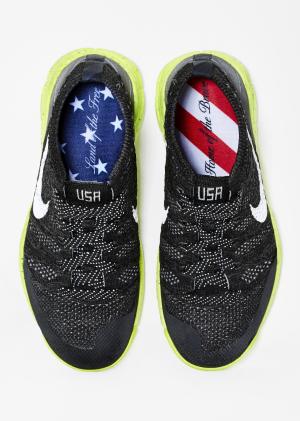